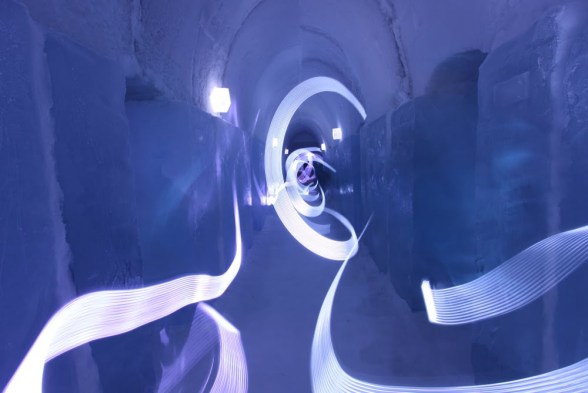 With the high profile launch of the much anticipated  Christmas blockbuster 3D TRON: Legacy having recently opened to much acclaim in cinemas across the world , a  British design duo Ben Rousseau and Ian Douglas- Jones  inspired by the Disney movie have launched  a ‘Tron’ inspired suite at the famous Icehotel in Sweden. The Icehotel is in Lapland, Sweden is the most famous, was the first and is largest of the ice hotels. It is the ultimate in ‘pop-up’ hotel concepts-as it is a temporary hotel, lasting only 5 months from December to April.Every  year the hotel is newly constructed and artists and designers are invited to collaborate in its design and construction.

Rousseau and Ian Douglas-Jones were commissioned by the Ice Hotel to create a TRON-inspired art suite for this winter using the EL wire to provide a futuristic lighting scheme. They only had 13 days to form the interior of the hotel room suite, install the lighting and install the interior scheme, which includes wall panels, a reindeer pelt covered bed and a table.The suite includes many light embedded panels, as well as a bed and table that all had to be created by hand.

With its electric blue ‘Tron’ inspired lighting scheme – this hotel ‘art suite’ looks like it came straight off the lot at ‘Pinewood’ studios. The graphic , linear light motifs are  achieved by cutting grooves into the ice slabs and with a variety of tools and then the EL wire was laid into the grooves and water was used to create new ice to “glue” the wire  icing over the wire to keep it in place.

As well as being iconic and directional in design terms the scheme for the suite is also highly energy efficient as this particular type of  energy efficient lighting technology needs very little energy and consistently and evenly glows in 360 degree. Called EL wire, or electroluminescent wire this low consumption lighting technology has many applications. An EL wire is made of a copper wire coated in a phosphor that glows when an alternating current is applied to it. The energy efficient technology allows just a few hundred feet of EL wire to be battery driven for several hours.

For the design duo their ‘art suite’ at the Ice Hotel called ‘Legacy of the River’, forms  part of their broader  launch campaign for their  new collection of illuminated furniture and interiors products scheduled to be launched in early 2011.

Given that large parts of our planet are covered in snow and ice at present-it is inspiring to see ice being turned into an art form …an energy efficient beacon in our winter of discontent….always good to turn a negative into such a good looking positive!